This 5-reel slot machine will surely have players battling for wealth and glory with a number of mysterious features that add to the excitement! Your objective in this game is to be the last Gladiator in the Grand Arena and win the Enter the Arena battle feature.
This feature allows you to choose a champion, be it the male champion Spartacus or the female champion Amazon. Use the character to fight the gladiators on the reels, and get free spins until the battle is won or lost.

Game of Gladiators has several Primus Attack special features to keep you engaged and help you accumulate more victories. These can be triggered randomly, some are triggered before a reel result and others after.

The graphics were carefully crafted and the artwork well rendered.

This game is a true visual spectacle, know it!
For fun 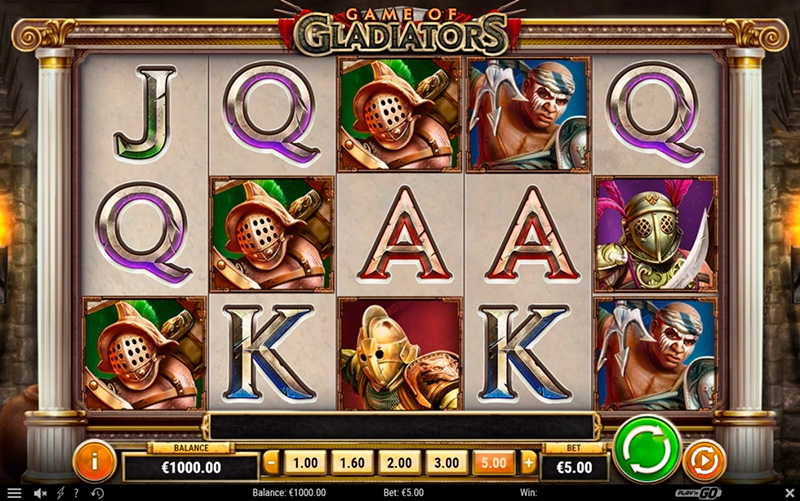 How to play Game of Gladiators

- Payline rewards are based on the number of paylines selected based on information in the paytable and game rules.
- When you win on multiple paylines in a single round of the game, all prizes are added together.

- All Advantage gains (such as Free Spins), Bonus Games and / or Scatters (if applicable) are also added to payline prizes.

- All winning combinations are paid at the end of the game round.

- Free Spin advantages are disputed with the same bet and the same number of rows selected from the round of the game that triggered the advantage, unless otherwise stated.

- The bet can not be changed during a round of match play. See the rules of the game for more information.

- Payment Table - Change the pay table screen.
- Autoplay - Click on the AUTOPLAY button to enable / disable the Autoplay advantage. In Autoplay mode, a number of consecutive game rounds are started automatically using the settings of your current bet. Autoplay mode is automatically disabled depending on your settings or if your balance is too low.

- Rotate - Rotate the roulette to start the game.
- Stop - To the machine faster.
- Quick Game - Activate to have a game much faster.
- If your game round is interrupted, all game information and bets made are stored until you reopen the game.
- You can continue your unfinished round from the point of interruption.

- The malfunction cancels all payments and plays.
Prizes [Game_of_Gladiators_prize]