Accumulate the king's fortune in Gold King, an imperial 5-reel slot. At each turn you receive an invitation to the Royal Room, where you can scramble the reels in search of gold bars, gold crowns, gold amulets and other symbols framed in gold.
Gold is a precious metal, so every Gold King spin is valuable thanks to the Super Stack feature: each reel is loaded with a random symbol stacks that increases your chances of reaching a winning combo that includes that symbol.

Do not lose sight of His Majesty while you play!

Everything that glitters can be yours in Gold King.
For fun 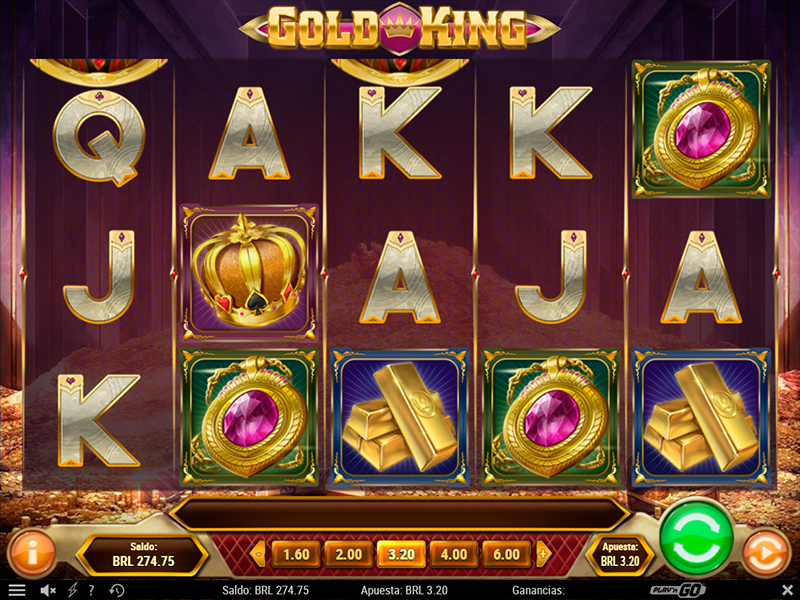 How to play Gold King

• Gold King is a 5-reel video slot game with 20 fixed paylines, and 1 fixed coin per line. Its most distinctive features are SUPER SPINS and SUPER STACKS.

• The game includes a wild symbol (Rose), and a free spin scatter symbol (Gold King). The wild symbol substitutes for any other reel symbol (except the scatter) to help comprise winning combinations.

• Super Stack: in each round during main game, one random normal symbol is selected which will fill 12 consecutive spaces on each reel.
• Super Spins: Three Gold King scatter symbols appearing on reels 1, 3, and 5 will trigger the Super Spins feature. 10 initial free spins will be awarded, but 2, 4 or 10 additional free spins can be won during the feature by getting 1, 2 or 3 Scatters on the reels respectively. There is no limit to the number of additional Super Spins that can be awarded.

• On any spin during the main game, a Golden Spin can occur. On a Golden Spin, reels 1, 3 and 5 will be filled with the chosen Super Stack symbol for that spin.
• Bets are selected using the bet buttons. Click the plus and minus buttons to change the bet one step at a time. To start the round, click SPIN. When the reels stop, the symbols displayed determine your prize according to the paytable.

Unfinished Games
If your game round is disrupted, all game information and placed bets are stored until you re-open the game. You may continue your unfinished round from the point of interruption. Malfunction voids all pays and plays.
Prizes [Gold_King_prize]