Hugo can have only three fingers, but you can still count on this nice troll to have a lot of fun on the football field as his teammate in Hugo Goal.
Play in this 5 reel slot and grab all five goals to win the glorious gold trophy and multiply all your winnings by 10 In Hugo Goal, you are the champion!
For fun 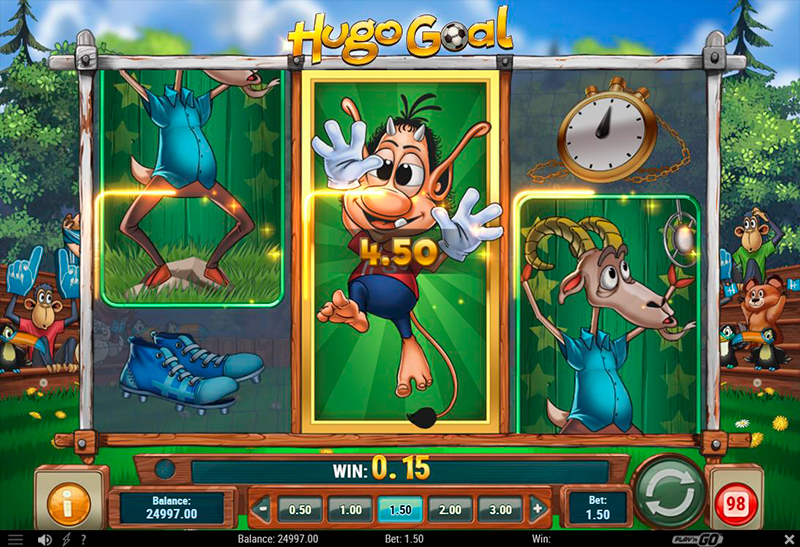 How to play Hugo Goal

• Payline wins occur on the number of selected paylines, according to the information in the paytable and game rules.
• When winning on multiple paylines in a single game round, all winnings are added together.

• All winnings from Features (such as Free Spins), Bonus Games and/or Scatters (if applicable) are also added to payline wins. All winning combinations are paid out at the end of a game round.

• Free Spin features are played with the same bet and same number of selected lines as the game round that triggered the feature – unless otherwise stated.

• The bet cannot be changed during a currently running game round. Please refer to the game rules for more information.

• Hugo, Afskylia, Don Croco and the Goat have all warmed up, tied their laces, and are prepared for the starting whistle in Hugo Goal.

• This is a 3-reel video slot played on 5 fixed paylines. A combination of three matching symbols along any payline constitutes as a win. • Hugo, the friendly troll, is a Wild symbol that appears in any position on all three reels. The Wild symbol substitutes for all normal symbols to help create winning combinations.

• Trigger the ACTION REPLAY feature on non-winning spins, when there are two full stacks of the same Character (Afskylia, Don Croco, Goat) symbol visible on the reels. The Wild (Hugo) symbol can be used to replace all Character symbols when triggering the feature.

• The reel without the full stacks will then perform free re-spins until you are provided with a winning combination!
• Trigger the FREE KICK feature on non-winning spins, when there are two full stacks of the same Item (Football, Whistle, Boots, Stopwatch, Flags) symbol visible on the reels. The Wild (Hugo) symbol can be used to replace all Item symbols when triggering the feature.

• The reel without the full stacks will perform only one free re-spin, giving you a second chance to win!

• If there is a possibility of two different reels to re-spin, the reel that provides the biggest potential reward will remain in place – triggering one of the two re-spin features.

• Trigger the PENALTY SHOOT-OUT bonus game when all symbol positions on the reels are filled with the same symbol.

• The Wild symbol can be used to substitute for all symbols. You play as Hugo, who is now acting as the goalkeeper, attempting to save as many penalties as possible in order to multiply your winnings from the game round that triggered the feature. You have exactly five attempts to save.
• Pick and click the position on-screen where you think Hugo will make a save! Each save will increase the Win Multiplier by one.

• Saving all five penalties will award the highest multiplier of x10! The available multipliers are: x2, x3, x4, x5 and x10.

• Bets are selected using the bet buttons. Click the plus and minus buttons to change the bet one step at a time. To start the round, click SPIN. When the reels stop, the symbols displayed determine your prize according to the paytable.
• Paytable - Toggles the display of the paytable.

• Spin - Starts the round by spinning the reels.

• Stop - Stops the reels more quickly.
• Fast Play - Toggle on for a significantly faster gameplay.
• If your game round is disrupted, all game information and placed bets are stored until you re-open the game. You may continue your unfinished round from the point of interruption.