Join the wizard as he performs one or two tricks to help you get the top prize in Street Magic, a 5-reel show!

The Wizard will be at your disposal with his clever hand game to help you unlock one of his representations as a Scatter symbol, or to help you create winning combinations by becoming a wild card.

If you place two Magician Scatter symbols on the reels, you will activate the Magician Performance functions and he will randomly perform one of his characteristic tricks. The "Wild Shuffle" will add extra Wilds to the reel; The "Expanding Man" will expand the two Scatters and create two wild reels and "The Transporting Man" will add a third Scatter to activate your free spins!

Get ready to be amazed and amazed ... a little magic does a lot!
For fun 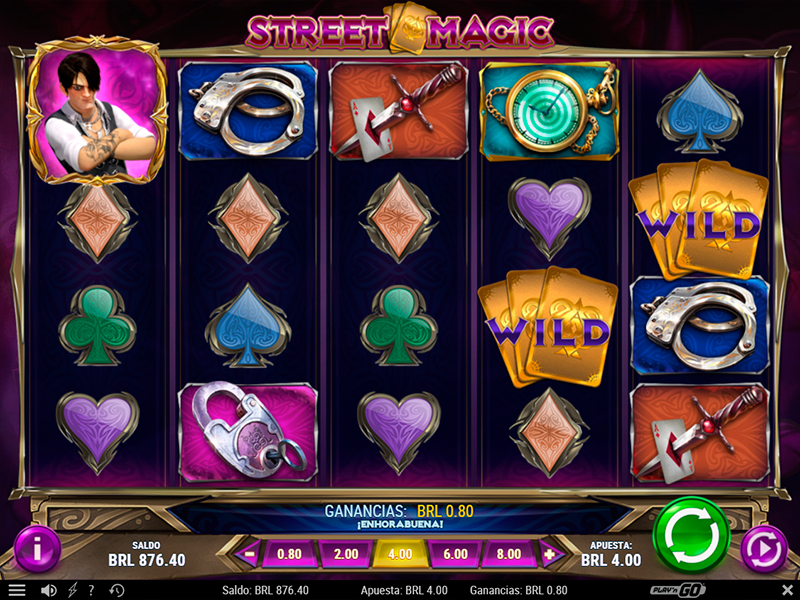 How to play Street Magic

When two Magician scatter symbols appear on the reels, they trigger the MAGIC TRICKS feature. Then, one of the three features below is chosen randomly and performed on the coils. Whatever you win is calculated and received at the end of the game round.

THE MAN TELEPHONE: A third Magician's scatter symbol is added to the reels, triggering FREE TURNOS. Triggers the FREE TURN feature when three Magical symbols appear on the reels. This can be achieved normally or by THE ELASTIC MAN. Choose one of the cards displayed to find out how many initial spins you have won. Chances are: 8, 10 or 12.
When a Wildcard symbol appears on the reels during FREE TURNGS, it stays on them until the feature is finished. Wildcard symbols can appear on all reels, anywhere.

Additional FREE TURNS are awarded when there are at least 1 Joker in each of the 5 reels. Choose one of the cards displayed to find out how many additional spins you have won. Chances are: 4, 6 or 8. The feature can only be reactivated once. The Scatter symbol can not be viewed during FREE TURNGS.
Bets are selected using the pushbuttons. Click the plus and minus buttons to change the bet one step at a time. To start the spin, click ROTATE. When the reels stop, the symbols displayed determine your premium according to the paytable.

Unfinished Games
If your game round is interrupted, all game information and bets made are stored until you reopen the game. You can continue your unfinished round from the point of interruption. Malfunction cancels all payments and plays.
Prizes [Street_Magic_prize]